Is your dog giving you deaf ears?

When this happens, avoid repeating the command over and over and imposing yourself until you get a response; instead, take a step back and consider the following scenarios which are some of the most common issues encountered when training dogs.

Once you analyse the cause, you can then work on the solution.

1. Low Value Treats: Are your treats worth working for?

It’s a romantic and hard to debunk myth that dogs work for us just to please us. In reality, as opportunistic beings, dogs are most likely thinking “what’s in it for me?” according to the Association of Pet Dog Trainers (APDT). The right use of treats can really make the difference between a dog who is eager to work and one who couldn’t care less.

The use of low-value treats (such as kibble) can really hamper their training if your dog isn’t excited by them, especially during the initial stages of learning or when there are distractions around. So, make sure your treats are worthy of attention.

Also remember to stick to treats which are soft, smelly, and in small bite-sized pieces. This allows your dog to quickly gobble up the reward and focus his attention back on you, rather than being distracted by a longer-lasting treat.

A suggestion? Try to use what respected veterinarian, trainer and writer Dr. Ian Dunbar calls the "Ferrari of dog treats": Freeze-dried liver.

2. Low Rate of Reinforcement: Are you missing out on rewarding?

In the initial stages of learning or when there are lots of distractions around, your dog may find sniffing the grass, looking around, marking territory and pulling on the leash more rewarding than training.

Why is that? It’s probably because there are stimuli that are extra interesting and are worth paying more attention to. If your dog has received little training in the past, he may have been doing this for a good part of his life.

Increasing the rate of reinforcement during this time by giving your dog more treats for his training efforts may help to motivate him, and will teach him to pay more attention to you than to the distracting environmental stimuli.

A low rate of reinforcement  can also cause your dog to get frustrated and give up trying; remember, during the initial stages of learning you need a continuous rate of reinforcement  (giving rewards for every success), and only once your dog shows signs of responding well can you move on to a variable schedule (only giving treats for success every now and then).

3. High Criteria: Are you asking too much at once?

This is where the saying “be a splitter and not a lumper” comes into play. It is often tempting to try to teach new behaviors all at once in a single evening.

When your dog stops working for you, you start thinking: “Am I asking for too much at once?” Truth is, often when dogs fail to respond to a command it is because it is too hard for them.

So try not to ramp up the difficulty too quickly; rather, break the objective down into several attainable steps to help your dog succeed. As an example, if you were trying to train your dog to touch the tip of a target stick with his nose, you could reward him for touching ANY part of the stick at first.

Over time once your dog gets a hang of this, you could then move on to rewarding him only for touching the rounded tip at the top of the stick.

Try your best to prevent your dog’s progress from stalling, and do not make your training sessions too long – keep them short and sweet!

4. High Level of Distraction: Is there too much going on?

​Dogs learn best when there are little to no distractions around, so be sure to start your training sessions in a quiet room where there is not much going on.

If you start on a busy street or at the dog park right away, your dog may not respond because you have not yet built a foundation for the behavior.

5. Lack of Training: Has your dog ever been trained before?

If the owner has a history of being inconsistent and not following through with the dog, there’s a chance the dog may have learned he could get away from certain behaviors and has learned to ignore the handler.

Dogs who have never been trained and have been allowed to do as they please for a good part of their lives often find the initial stages of learning difficult, since the concept is entirely new to them. It is up to the handler to become interesting and worth listening to by investing in reward-based training methods, like the ones taught in Adrienne Farricelli’s Brain Training for Dogs course.

6. Unclear Cures: Are you confusing your dog?

​Dogs thrive on consistency, so make sure you always use the same command cue and that all other people training the dog are on the same page. If you ask for a command and your dog just stares at you, consider if that command has a history of being used consistently.

In classes, it is not uncommon to encounter a family where the wife uses “come” to call the dog, the husband uses the dog’s name, and the kids just say “here!” Don’t ask for behaviors in multiple ways, and make sure your body language is congruent with the verbal command. Dogs find body language more salient then verbal cues.

Also, try your best not to repeat commands over and over, otherwise your dog will learn not to listen to the first time you say it, but will wait for you to finish your sentence instead!

7. Frustration Build-up: Are you getting frustrated?

Dogs are masters in body language and they can easily detect frustration. When the handler’s frustration builds up, dogs often shut down instead of becoming more compliant.

In this case, it helps to ask the dog for a behavior he knows well (such as a sit) followed by a reward to end the session on a positive note. You can try the exercise again a little bit later, possibly further splitting the exercise into smaller sections if it was too hard for your dog.

Also, keep in mind that if you start raising your voice, bending down or getting into your dog’s face, you are intimidating him and he will feel the need to send you appeasement signals and default behaviors, rather than listening to your commands.

8. Emotional Problems: Are emotions getting in the way?

If a dog is fearful, anxious or nervous, his emotional state may interfere with training. This is because the dog is often in a fight or flight state which affects his cognitive function, impairing his ability to learn.

In such a case, you may need to work in areas where your dog is less likely to be frightened and then gradually introduce more and more stimuli in a way which does not cause him to react.

As an example, if your dog was frightened of thunder, instead of immediately exposing him to recordings of thunderstorms on full volume, you should first play them at a very low volume, where he acknowledges the sound but does not become scared. After rewarding your dog while the sound is played, you would, over time and numerous training sessions, increase the volume at which you play the recording.

This process is known as desensitization and is a common technique used in dog training.

9. Health Considerations: Is your dog in pain or discomfort?

​If your dog ignores you, he may be feeling unwell or uncomfortable. If your dog has always been obedient and is now slacking off, it is best to have your veterinarian rule out any medical problems. Sloppy sits or a reluctance to lay down may be indicative of orthopedic problems.

Aside from medical problems, some dogs may not like to be trained on certain surfaces, or perhaps the weather is too hot, too windy or too cold – there are a multitude of possibilities. Often, a distracted dog may simply need to relieve himself or get a drink of water.

Consider how well you could perform in an exam if you were busting to use the bathroom!

10. Intelligence: Are you brain training your dog?

​Many owners are not aware of this, but when it comes to dogs, idle minds are the devil’s workshop. Yet many owners are happy to leave their dogs bored by the fireplace all day, leading to untold behavior problems. The simple secret to a well-trained dog is engaging their mind and getting them thinking.

In the wild, before domestication, dogs would spend much of their lives performing tasks necessary for survival. Even in more modern history, dogs had special roles to perform in their relationships with humans.

You can still see these natural drives in dogs today! For example, you will notice how beagles love to follow scents, how some terrier breeds love to dig, and how treeing coonhounds bark upon noticing prey up a tree.

Unlike humans who perhaps dread the 9 to 5 grind, dogs actively WANT to work, and when they do not, they become prone to behavior problems, disobedience, and poor psychological well-being. Many owners spend THOUSANDS on dog training when the solution could be as simple as providing Rover with more mental stimulation!

Fortunately, Brain Training for Dogs offers a solution to this problem.

Written by professionally certified trainer Adrienne Farricelli CPDT-KA (who’s work has appeared in USA Today, Everydog Magazine, Nest Pets and more), Brain Training for Dogs is one of the first training programs to not only teach obedience, better behavior, important skills and tricks, but to also work on increasing intelligence and engaging the dog’s brain too.

Through 21 fun and simple games, the novel and scientifically-proven methods taught by Adrienne are sure to improve the lives of both you and your dog! By the end of Brain Training for Dogs your dog will be able to tidy up his toys, play the piano (yes, really), and identify his toys by name – all while being a better behaved and more obedient dog.

Want to get started with brain training? You can check out the course by clicking here:

>>>Get brain training for dogs today 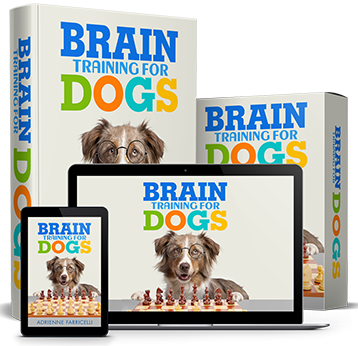 As you can see, there are many reasons why your dog may not be listening to you. Don’t quickly label your dog as stubborn, don’t begin shouting commands like a drill sergeant, and don’t give up training altogether – instead, try to give your dog a break and consider what may really be going on. A better understanding of how dogs learn should pave the path to better training.

1 thought on “10 Reasons Why Your Dog Ignores Your Commands”

@smilingstaffy Has anybody seen my other sock? ⠀

@smilingstaffy Who loves coming home to be greeted

@smilingstaffy Look a the joy on his little face!

@smilingstaffy Who else's dog is their best friend