The gorgeous Staffordshire Bull Terrier is one of Australia and Britain's most popular dog breeds. Brave, loyal and playful, Staffies live life at a million miles an hour. They’re also extremely affectionate, get on very well with children and simply love spending as much time with their people as possible.

Add to this their unique personality and they make wonderful companions for the right owners.

But the Staffy’s modern role as a companion animal is a far cry from their brutal origins in 19th-century dog fighting rings, where the staffy's powerful jaws and tenacious spirit were prized above all else.

So, how did the Staffy go from being a fighter to a lover and how did it become one of the world’s most popular dog breeds? Keep reading to find out all about the fascinating history of the Staffordshire bull terrier.

Prior to the 19th century, so-called bloodsports were a very popular pastime in Britain. Cock fighting was one example, but some of these other sports involved dogs. These included:

Bear baiting involved multiple fighting or baiting dogs being pitted against a bear, which was chained to a post.

​ Bull baiting involved pitting a dog against a bull that was tied to an iron stake. The dog’s job was to grab the bull by the snout and not let go.

Bull baiting had been around since ancient times but both of these barbaric sports became particularly popular in the Middle Ages. Bull rings were common sights in towns and villages across the country, with everyone from aristocrats to the poorer classes participating in the sport. Spectators would gamble on the outcome of these contests, each of which was eagerly anticipated.

As these brutal sports continued to increase in popularity from the 13th century onwards, people began searching for dogs that were best suited to baiting. Strength, courage and ferocity were all highly prized characteristics, with Mastiff-type dogs originally a popular choice.

However, with these larger breeds shown to be a little too slow in the ring, dog owners began to turn their attention to creating a dog with all the characteristics of an excellent baiting dog. Along with power and bravery, the dogs needed to be faster and capable of seizing a bull and not being tossed off.

The result of these breeding programs was the Bulldog. A very different beast to the easy-going modern Bulldog, the Bulldog of the 18th century was built to work and fight. Low to the ground and muscular, their short muzzle allowed them to keep a firm grip on the bull. Meanwhile, those now-iconic facial folds ensured that sweat and blood could easily flow away in the midst of a fight. 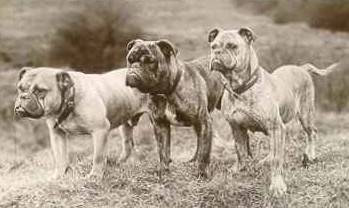 Origins of the Staffy - 19th Century

In 1835, bloodsports were banned in England. They didn’t just disappear overnight, however, and instead went underground. But with bull baiting and bear baiting rings very difficult to conceal from the authorities, dog owners began pitting their dogs against one another.

While the Bulldog may have been the best at baiting, it wasn’t perfectly built for fighting other dogs. In an effort to create fierce fighting animals, the courageous Bulldog was crossed with agile and tenacious terriers. Several new breeds were created as a result. Most of them are now extinct and none have stood the test of time like the Staffordshire Bull Terrier.

The breed’s high levels of popularity in Staffordshire were the reason it was given the familiar moniker we know today. With its muscular build, broad head and undeniable courage, the Staffy was a formidable foe in the fighting ring. But this dog was also loyal and loving towards its owners — a fact that would heavily contribute to their popularity more than a century later.

Why? Well, by this time many had become aware of the Staffy’s suitability as a companion animal. Loyal and loving, these affectionate dogs adore the company of people. And because they’re eager to please, they’re also quite trainable.

Recognising the Staffy’s potential, responsible breeders set about developing the breed into a trustworthy and devoted companion. Instead of prioritising fighting qualities, breeding dogs were chosen based on their gentle nature and suitability as pets.

As a result, the Staffy’s popularity soon increased again, with the breed gaining official recognition from the Kennel Club in May of 1935. And since then it hasn’t looked back. 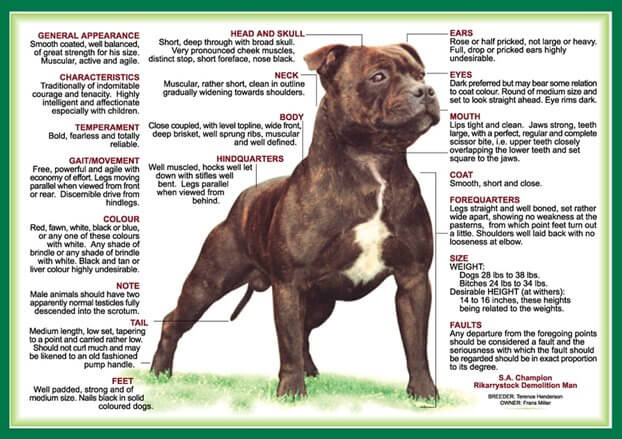 Among owners of the breed, the Staffy has a well-earned reputation as a wonderful companion. Loyal and devoted, these dogs thrive when welcomed into the home and treated like part of the family. No matter what you’re doing throughout the day, your Staffy wants nothing more than to be right there beside you.

Staffords also have an affinity with children, while their playful and energetic nature means they’re always up for a game. And because they’re intelligent and eager to please, they will usually respond well to training.

Unfortunately, like the doberman and German shepherd in previous years, the Staffy's reputation has been harmed by some negative news stories branding it an agressive and dangerous dog breed. In these cases, I believe the behaviour of the dogs involved to be largely down to poor breeding, ownership and training. Any dog can turn nasty under such circumstances.

Of course, that doesn’t mean the Staffordshire Bull Terrier has completely forgotten its natural instincts. Most Staffies have quite a strong prey drive, so they can be prone to chasing small animals or even showing signs of aggression towards other dogs. You can overcome this by:

Socialising your dog. Exposing your Staffy to new situations and experiences as a puppy will help them grow into a confident and well-behaved dog. Socialisation is especially important if you want your Staffy to get on well with other dogs.

Making a commitment to train your Staffy. Regular obedience training is a must for every dog, so make training sessions part of your pet’s daily routine from a young age.

Giving them plenty of interaction. Staffies need companionship and love being around people. Don’t leave your Staffy outside; welcome him/her into the family home and include them in your life whenever possible.

Despite their brutal origins, the Staffy is an excellent pet. If you’re willing to put in the hard work to socialise your puppy and give it all the TLC needed, you’ll be rewarded with a loving lifelong companion.

@smilingstaffy Has anybody seen my other sock? ⠀

@smilingstaffy Who loves coming home to be greeted

@smilingstaffy Look a the joy on his little face!

@smilingstaffy Who else's dog is their best friend