Puppies are lovely. If you're new to breeding, or your Staffy is pregnant for the first time, the wait for the puppies' birth can be a long and nervy one. Fortunately, it is a much shorter wait than a human pregnancy; dogs are generally pregnant for around 2 months.

Unfortunately, our staffy isn't able to talk to us and tell us exactly what is going on and how they're feeling during pregnancy. As owners, this can be difficult and lead to many worries and questions during the pregnancy, which is just why I decided to include this article on Smiling Staffy.

This staffy pregnancy guide has been written to give you some ideas of what to expect when your dog becomes pregnant. 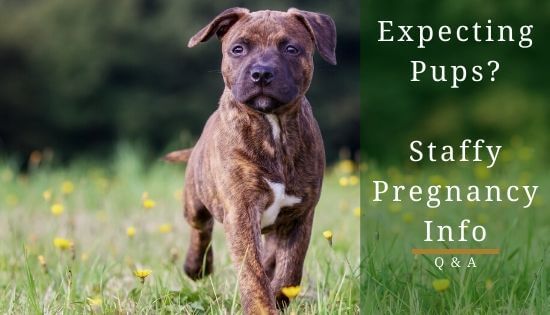 How Long Are Staffies In Heat For? - The Reproductive Cycle

Before I get on to discussing the pregnancy itself, it is important to first understand more about the reproductive cycle of your dog.

Knowing about the heat cycle is a very important thing in order to determine the pregnancy's length. Dog owners can calculate the dates of conception by taking note of their female Staffie's breeding period and heat cycle, which makes it a lot easier for a vet to perfectly test for pregnancy.

Healthy female dogs, in general, go into heat in about every six months on average, though it differs with the breed of dog. The heat cycle of the Staffy lasts between 18 to 21 days and its divided into four key stages. Staffy breeders make use of these stages when determining the perfect time to breed their Staffies.

The 4 stages of a staffy reproductive cycle are:

This stage lasts for an average of nine days and represents the initial stages of the reproductive cycle. This stage is the period in which the female dog becomes receptive to the male. Although,  they'll reject the advances of the males until the second stage. The signs for you to look out for during proestrus include:

This stage lasts between three to four days or seven to eleven days. This is the stage that the female dog becomes receptive to the male. Several breeders go to a veterinarian to take blood tests and vaginal smears during the proestrus and estrus stages in order to make sure that their dogs are bred by them at the optimal period. The signs of estrus are:

​This is the last stage of this cycle. It normally happens around the fourteenth day. When diestrus is happening, the female dog’s discharge becomes redder then tapers off, the vulva becomes normal, and she won't allow mating anymore. The heat cycle is complete the moment every sign of discharge and swelling are gone.

Anestrus is the period between a particular heat cycle and the next one and it normally lasts for about six months.

When your female Staffy is pregnant,  it will of course be quite different to the human equivalent, though some aspects will be similar such as morning sickness. Here is a list of the symptoms you should check out for in your Staffy and when you can expect them to occur.

Early Signs of a Pregnant Dog

In the first few weeks of your Staffy's pregnancy, she'll most likely have a lower appetite and will probably experience some form of morning sickness. Similar to humans, the dog body will start experiencing an influx of hormones and also physical changes the moment her uterus starts enlarging.

The dog may also show behavioural changes, such as being more distant than usual. There is also a likelihood that the energy levels of your dog might become lower than normal.

After the initial five weeks or so, your dog's appetite will have an immense return. Her belly will start becoming bigger, and she'll gain weight. The change in her belly will now become quite visible. It is also likely at this stage that the nipples of your Staffy will be enlarged, and some hair will shed around the nipple region.

In the last weeks of your Staffy's pregnancy, from around weeks 6-9, when she is getting ready to give birth to her pups, you will likely notice her developing some a moodier character.

She'll look for a quiet, comfortable space to deliver her puppies. Help your dog by creating a whelping box with sheets or towels (that you are willing to do away with) placed on top a waterproof plastic. You could also buy a disposable one like this.

The abdomen of your dog will become firm and thick. She may become kinda moody during these last weeks of her period of gestation. If she suddenly seems extra restless, it is likely to be a sign of her increasing discomfort and oncoming labour.

The Staffy pregnancy period is usually around 65 days. Just like the humans, there is no constant length of pregnancy so the figures are just estimates.  The first day should be counted from the last day they mated. As I mentioned earlier, this period is called the gestation period.

The moment the gestation period ends, labour starts. The labour period is divided into 3 stages.

The first stage lasts between 12-24 hours and is often times hardly even noticeable. There will be an increase in contractions in the uterus's muscular wall throughout the first stage, both in frequency and strength but there is no visible contraction. Instead, be on the look for these symptoms of labour in your Staffy:

The puppies are birthed in this the second stage.  This stage typically takes between 1-24 hours and the bitch will deliver one puppy at a time. Each pup's delivery should not take more than 1 or 2, and normally happens every 30 to 60 minutes. For this reason, it's helpful to be aware of the total number of expected puppies. Staffies tend to deliver between 4 and 8 puppies.

You should reach out to your vet if the labour of your Staffy lasts for more than twenty-four hours, or if the period in between puppies lasts more than two hours. This could be a signal that there is a severe complication, and both the life of the unborn puppies and the female Staffy could be at risk.

18 thoughts on “How Long Are Staffies Pregnant For? – Staffy Pregnancy Guide”